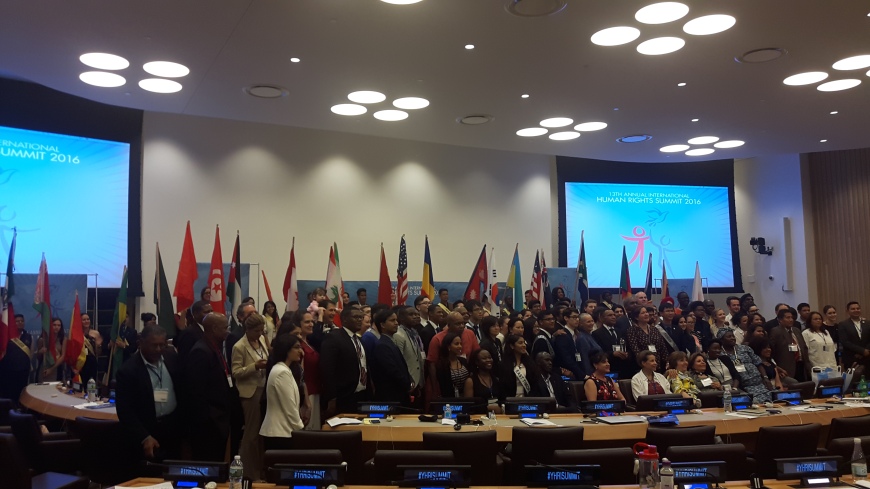 I recently attended the 13th Annual Human Rights Summit at the United Nations Headquarters in New York. I didn’t quite know what to expect but it turned out to be a pretty cool event. There are always the opportunities to chat, connect and network with others in the field at such gatherings of experts and supporters. But there were two people in particular, who were intimately acquainted with suffering and brutal abuse, who had the most unexpected responses to their experiences; and these people brought me to tears. Here are their stories.

A Story of Brutal Police Oppression with an Unlikely Ending

In his youth, Augustine Brian of Papua New Guinea was the victim of horrible violence at the hands of the police. Aghast, many of his family and community had gathered to confront the perpetrators. Mr. Brian however, had no appetite to escalate the situation. Instead, as his broken body recovered, he searched for solutions that would make a more lasting impact. That’s when he read an article by Nelson Mandela that, according to Mr. Brian, inspired him completely and showed him the way. He began educating himself on Human Rights. During his study, he found that an organization called Youth For Human Rights International would send him free materials to teach and train others on the subject, so he made the request. He didn’t actually believe anyone would send him anything, for free at that, and in Papua New Guinea. But shortly after, Mr. Brian received his training materials in his mailbox.

Armed with knowledge and educational tools, he approached the leaders of the police department, asking if he may conduct educational workshops on Human Rights. The police, seemingly unaware of the concept, agreed and humored Mr. Brian, perhaps even recognizing the opportunity to diffuse a volatile situation peacefully. So Mr. Brian began teaching the local police in Papua New Guinea, about Human Rights and their importance. Not only did he capture the interest of his audience, he was signed on for more such training, and he continues to work with the police in his country to this day.

The most powerful part of the story was when Mr. Brian spoke of how the very policemen who brutalized him approached and surprised him by asking for his forgiveness. He was brought to tears that day. That’s when Mr. Brian’s efforts began to lead somewhere good. And several years later, he would be in New York City, at the Headquarters of the United Nations, recounting his story to hundreds of strangers from around the world, as they awarded him the Human Rights Heroes Award for 2016. There was not a dry eye in the room.

Growing Up as a Child Survivor of a Suicide Bombing

Sayed Mahmood Kazmi is no stranger to conflict, having grown up in the tumultuous Indian state, Jammu & Kashmir. But when he was a boy, he survived a suicide bombing in a Pakistani mosque. What might such a traumatic event do to a child, one wonders? Now a young man, Sayed stood at a podium at the United Nations. And much to our surprise, upbeat and engaging he addressed his “fellow gentlemen” when he asked why they were absconding in the fight for gender equality. “Its not their fight,” he said, speaking for women, “it’s our fight!” Sayed spent his moment in the spotlight speaking for the women in his world, pleading with men to see them as equals and fight for them so we could all, one day soon, live in equitable harmony. The spirit of this young man, having survived so much, standing for an entirely different issue, inspiring people, believing in their inherent goodness was so moving that we cried, clapped and cheered. He was quite literally wonderful up there.

Youth for Human Rights International, the organization behind the event, are remarkable. Founded on the commitment “to teach youth about human rights, specifically the United Nations Universal Declaration of Human Rights, and inspire them to become valuable advocates for tolerance and peace”, the organization has come far and impacted many since its 2001 conception. Most people have no idea what exactly their human rights are, let alone realize they have 30 of them. It isn’t difficult to imagine that the world would be a more equal and harmonious place if we could do a better job of educating generations of our youth.

Attending the event was a powerful experience, with compelling thoughts, ideas and convictions from young people around the world. And hope. There was a lot of hope.

By noon, I was in tears. Not because horrible things have happened and continue to happen, and to children no less. I was in tears because I was struck by the realization that these people – most too young, who had lived through such horrible things, who had been victims themselves, who had overcome so much – were so very full of hope, they were consumed by it! How, I wondered? They had so much hope for the future, and such great plans! Their incredible strength brought me to my knees. And it reminded me why I’ve set out to do what I have. Because, in the end, all we have is our collective humanity; when times are tough and things seem the most desperate is when we must fight to protect this humanity.